The Blair Witch Project was the love-it-or-hate-it horror event of 1999. For every individual who thought that it was a groundbreaking cinematic masterpiece, there was always a detractor around the corner who would condemn it as a waste of film. After I saw the film in theatres, I ended up on the former side of the spectrum. I thought that it was a brilliant improvisational piece that was truly frightening. I still do. Yes, it is partly responsible for the rise of the “found footage” genre, and a few of the films that it inspired are noteworthy, while many of them are forgettable. However, The Blair Witch Project, with its intriguing mythology and chilling atmosphere, will forever stand out as one of the most inventive films of its kind.

Here are five reasons why The Blair Witch Project is one of the best films ever made.

1.) The mystery and mythology: From the opening title card which informs us of the fate of the three protagonists, The Blair Witch Project is a film that is cloaked in the mysterious from start to finish. Directors Eduardo Sanchez and Daniel Myrick have done their homework here, letting us know from the get go that this isn’t going to end well. They then proceed to build a world and a home-spun mythology around these people that allows for total immersion into the horror that is about to unfold.

2.) Raw emotions: The Blair Witch Project is a master class in acting. The directors found Heather Donahue, Michael Williams, and Joshua Leonard during a casting call for actors who were skilled in improvisation. The directors then manipulated their performances in various ways throughout the shoot, in order to capture the emotion that was required. These actors were really tired, really irritable, and really scared, lending an authenticity to the film that the various imitators lack. This aids in suspension of disbelief, and makes the situations that the characters encounter all the more terrifying as a result. As Heather, Josh, and Mike literally roam around the woods in circles, their panic becomes our panic. After all, we are dealing with pampered film students who lack outdoor survival skills. No one even stops to think to follow the river downstream and back to civilization – and even if this occurred to them, would it matter? By this time, it’s too late. The Blair Witch has caught them in a vicious cycle from which they will never escape. The phenomenal performances make us believe.

3.) The power of suggestion: Sometimes, the scariest things in life and in the cinema are the things that we cannot see, the things that are merely hinted at. The Blair Witch Project takes an old-school approach in that we never see the malevolent entity which haunts our three protagonists. In a world of cinematic horror where subtlety often takes a back seat to CGI-riddled thrills, Blair Witch remains effective because of what it chooses to conceal.

4.) The woods of Burkittsville, Maryland: Yes, the woods. The wooded labyrinth through which Heather, Josh, and Mike wander aimlessly is as much of a character as anyone or anything else in the film – and just as ominous as any witch. We spend many moments watching the three students disappear into the inky darkness of the forest, while disturbing sounds echo through the night, heightening the anxiety. Daylight provides no comfort, as they discover eerie little artifacts along the way that seem to follow them wherever they go. Remember the creepy stick-men? Also, a pile of rocks has never been so menacing. Just see the film. You’ll know what I’m talking about. 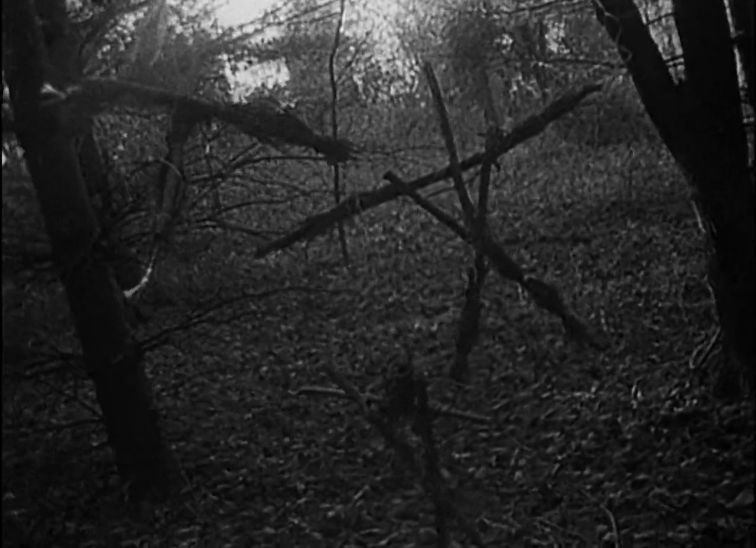 The Blair Witch Project suffered a terrible backlash after the hype surrounding its release. Most mainstream audiences were not prepared for the nearly gore-free experience that the film provided, having been exposed to the likes of I Know What You Did Last Summer and other bloody slasher films a few years prior. And yet, fourteen years have passed since Blair Witch opened on July 30th, 1999. With the success of other mock documentaries, such as the blockbuster Paranormal Activity, perhaps it is time for horror fanatics to return to the film that started it all.

The Blair Witch Project is available on DVD and Blu-ray from Lionsgate. The Blu-ray contains exclusive bonus features, including four alternate endings – reason enough to revisit this amazing film.