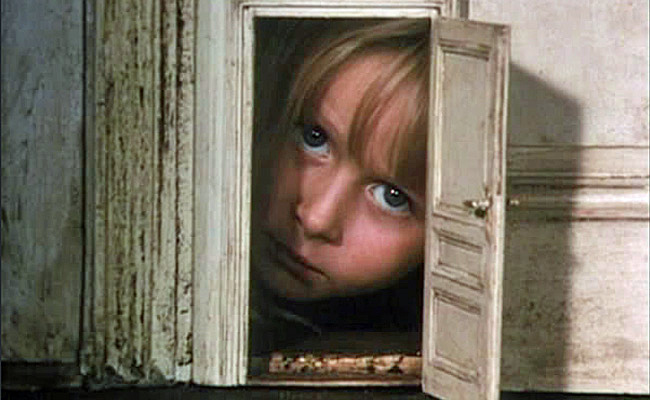 A young girl sits next to her older sister in front of a creek, casually tossing stones into the bubbling waters out of boredom. Her sister quickly grows tired of this, and slaps her on the hand. She angrily stares dead on at the audience. This young lady is Alice. This is Lewis Carroll’s beloved tale in the hands of Czechoslovakian animator, Jan Svankmajer – and you have never seen anything like it.

Once we are in Alice’s room, it is immediately clear that she lives in an unconventional household. She is surrounded by sewing materials, porcelain dolls, mason jars full of preservatives, as well as stuffed creatures – leading us to believe that her father is probably a taxidermist, although we never see him.

Alice lies down, perhaps to contemplate the events of her day, when something catches her off guard. The stuffed rabbit in the glass display begins to move. She watches in horror, as the rabbit pries its paws out of the wooden boards which it was previously nailed to. It dons a top hat and a pair of rusty scissors, and smashes its way out of the display, before running outside, leaving a trail of saw dust in it’s path. Rather than hopping down a rabbit hole, this demented creature crawls into a desk drawer, which serves as the entrance to a dark cavern, which leads to an alternate dream world. Alice follows after him, and, after having a bit of trouble, wriggles inside the desk drawer. Once we are inside, we notice two things: most of this hallucination resembles Alice’s immediate environment, and most importantly, we are definitely not in Wonderland.

Many of the possessions from Alice’s room make their way into this nightmare, from the porcelain dolls, to the preserved skulls and skeletons, right down to the sewing kits. They all play a part in Alice’s descent into darkness for the next hour. Most of the familiar elements from Carroll’s beloved stories are present, from the caterpillar, to the mad hatter and the March hare, to the inkwell and the tarts, which magically adjust Alice’s height, according to her surroundings. It is all the same, yet entirely different. Added to that, it is never really clear whether Alice is dreaming or not. This sense of ambiguity is what drives the film. Gone are the whimsical overtones of the Walt Disney feature. This is Alice in Wonderland as it was meant to be – a tale of a dark and mysterious child, who is a victim of her own delusions.

Alice was released in 1988 to critical acclaim, mainly in art-house circles. Many were impressed with Svankmajer’s ability to take ordinary, everyday objects and animate them. Jan Svankmajer is a major artist in the surrealist movement, who has inspired many film directors, including Tim Burton, who would go on to direct his own version of the story years later. Compared to Burton’s version, Jan Svankmajer’s Alice ultimately follows the original text to a closer degree – although liberties are taken in abundance. Whereas Tim Burton’s film was atypically aimed at family audiences, Jan Svankmajer takes the story back to its twisted roots.