Stanley Kubrick is my idol. He is one of, if not the greatest, filmmaker of all time. My first Kubrick experience occurred when I was in high school. The film was The Shining. I had never seen anything like it in my life. Not only was it scary as hell – it was – but the sheer inventiveness of the film making stunned me. I started noticing the tracking shots. Most of the film is a series of long tracking shots and zooms. They were all beautifully executed and framed. The lighting also struck me. It was different than what I had been used to, and I liked it. The beauty of this film was in the simplicity of how it was put together. There was simply no need for the MTV-style editing that had become so popular with the “cut, cut, cut, cut” mentality of the time, which was quite pervasive, and was growing tiresome. Kubrick would simply set up the shot, and let the actors act. There were no distractions, and the story simply told itself. I was hooked, and it instantly became one of my favorite films. I’ve probably seen it more than fifty times.

Later on, I discovered A Clockwork Orange and Full Metal Jacket. Both of these films resembled The Shining in their meticulous attention to detail, and not only that, but the films were rich, not exclusively in a technical sense, but on an intellectual level as well. The best thing about watching a Kubrick film is the thought process that you go through afterwards, when you reflect on what you have just seen. You get to peel back all of the intricate layers, and sometimes you don’t even realize what you have just seen until the fifth or sixth viewing, which moves me on to Kubrick’s final film, Eyes Wide Shut. 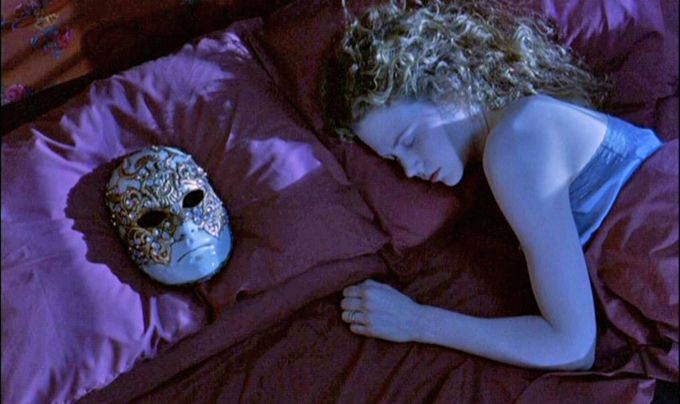 Principal photography for this film lasted for four hundred days, and it was entered into the Guinness Book of World Records as the “longest constant movie shoot”. Obviously with this film, as with every other film that Kubrick made, time was no obstacle. Only someone with Stanley’s track record could have pulled that off. Furthermore, if he was anything at all, he was a perfectionist. He pushed his crew and his actors, pushed them so that he could get the best that they had to offer. If the performances of some of his actors seem overplayed, it’s only because naturalistic acting never appealed to Kubrick, as he would always say, “Natural is good, interesting is better.” The “interesting” aspect would come after fifty or sixty takes of the same scene. He would bring his actors to the point where they literally had nothing else to give, and then that was oftentimes the take that he would use. Filming on Eyes Wide Shut played out like this, and thank the heavens that it did, because the final product was nothing short of another masterpiece.

The thing that separates Eyes Wide Shut apart from the rest of Kubrick’s filmography could be summed up in one word: hope. Yes, you read that correctly! Eyes Wide Shut is a very hopeful film. Kubrick’s films are extremely pessimistic, in that they hone in on the dark side of human nature. Humans are portrayed as weak, ignorant, stupid, and beyond redemption. However, in his final film, he embraces themes of passion, commitment, loyalty, and even love. The whole film is a cautionary tale about the dangers that come with marriage, namely the temptation of adultery. After all, we are human. Any one of us can be tempted at any given time. Stanley Kubrick understood and respected the institution of marriage, and was faithful to his wife until the end. Somewhere along the line, however, he felt compelled to make this film, particularly after reading “Traumnovelle”, a 1926 novella by Austrian author and dramatist Arthur Schnitzler.

Eyes Wide Shut tells the story of Dr. Bill and Alice Hartford, an upper class, married couple with a young daughter. When the film opens, they are preparing to attend a prestigious Christmas party that they have been invited to by one of Bill’s patients. Alice adjusts her hair, and seemingly satisfied with it, asks Bill’s opinion. Bill insists that her hair looks beautiful, yet he never even looks at her as he preps himself in the mirror. It is here, during the very opening moments of the film, that we are able to see Dr. Bill’s major flaw: he doesn’t really appreciate his wife. They’ve been married for years, and, apparently, the act of complimenting his wife has now become routine. Once Bill and Alice reach the party, the host comes over to greet them, and we then dissolve to Bill and Alice lovingly dancing together, musing and asking themselves why they were even invited to this overblown gathering in the first place. Bill notices an old friend of his at the piano, and excuses himself. In the meantime, Alice grabs a glass of champagne and waits by the bar, where a strange Hungarian man approaches her, and asks her to join him for a dance. His intentions are obvious from the start. He attempts to wear her down in her drunken state. “Don’t you think one of the charms of marriage is that it makes deception a necessity for both parties?” he asks Alice. He has her cornered, and eventually, after several of his advances, she reminds him that she is married and walks away. Meanwhile, in another part of the house, Bill walks down the hall with two models hanging on each arm. Their game of seduction begins. “Don’t you want to go where the rainbow ends?” they both ask. Sensing trouble, Bill attempts to excuse himself, until he is summoned by someone else, and he leaves the two temptresses to themselves.

So, Bill and Alice have both remained faithful, and resisted temptation, for now. Later on that night, and with the help of a joint, Alice starts questioning Bill about the two women that he was with. He tells her that it was nothing, that they were just two dumb models. She also takes it upon herself to tell him of the Hungarian man that tried to seduce her. Bill tells her that it’s only natural for men to feel that way. She’s beautiful, after all. There is not much jealousy in his response. This sets Alice off, and she goes into a tirade. Bill, in his ignorance, also makes the statement that women do not operate the way that men do, concerning sexual matters. She stops him dead in his tracks, and tells him that when they were vacationing the year before, she made eye contact with a young naval officer. She goes on to say that it was only a glance, but that she would have been willing to give up her family and her life for one night with him. Ultimately, she came to her senses, but the fact remains that the thought of infidelity was on her mind, and she could have acted on it.

From here on, Bill becomes insanely jealous. He realizes that his wife isn’t just a prop. She is capable of hurting him, and he sets out to prove that he is just as capable as she is. He goes out on the town, and his journey into the sexual underworld begins. He is faced with temptation throughout the night, yet every attempt at consummation is interrupted. One such interruption happens to come in the form of a phone call from his wife. However, he proceeds and is determined to explore, hopeful that an opportunity to be unfaithful will present itself. Before the night is over, he ends up at a mysterious masked, pagan orgy filled with powerful members of society. Here, he witnesses the raw depravation of infidelity. This scene, probably one of the most controversial scenes in film history, is not sexually enticing at all. It is ugly and horrific.

The last scene takes place in a shopping mall. Bill and Alice’s daughter runs around looking at dolls, while they talk amongst themselves about recent events. “The fact is that we are both awake now,” Alice says, “and I do love you.” She then suggests that they go home as soon as possible to, as Alice bluntly puts it, “fuck”. This scene is powerful and brutally raw in its honesty. In Kubrick’s only love story, he has taught us the importance of the covenant of marriage. There is such a thing as healthy jealousy, and both Bill and Alice have learned this valuable lesson by the film’s conclusion. They will strive to keep each other away from the darkness, to appreciate one another, taking nothing for granted.

“In a modern world that is rife with infidelity, lies, hedonism and sexual decadence Stanley is encouraging us all to throw away our masks and take a good look in the mirror. His final and most underestimated masterpiece is a call for an end to all forms of secrecy, be they personal, social or political.” – Rob Ager, from his essay, “Unseen Reflections”

Tragically, Stanley Kubrick died shortly after the release of Eyes Wide Shut. Allegedly, he was quite pleased with the final product. Like all of Kubrick’s films, it opened to mixed response from the critics. Over time, this film has aged like a fine wine. Every time you watch one of his films, you learn something new, or you see something that you had never noticed before. Eyes Wide Shut is not just about the evils of infidelity. There is much more to it than that. Multiple viewings bring much of this to the forefront.

It is in this way that Stanley Kubrick left a legacy. He will never be forgotten and his films will live on, decade after decade, and will remain classics.