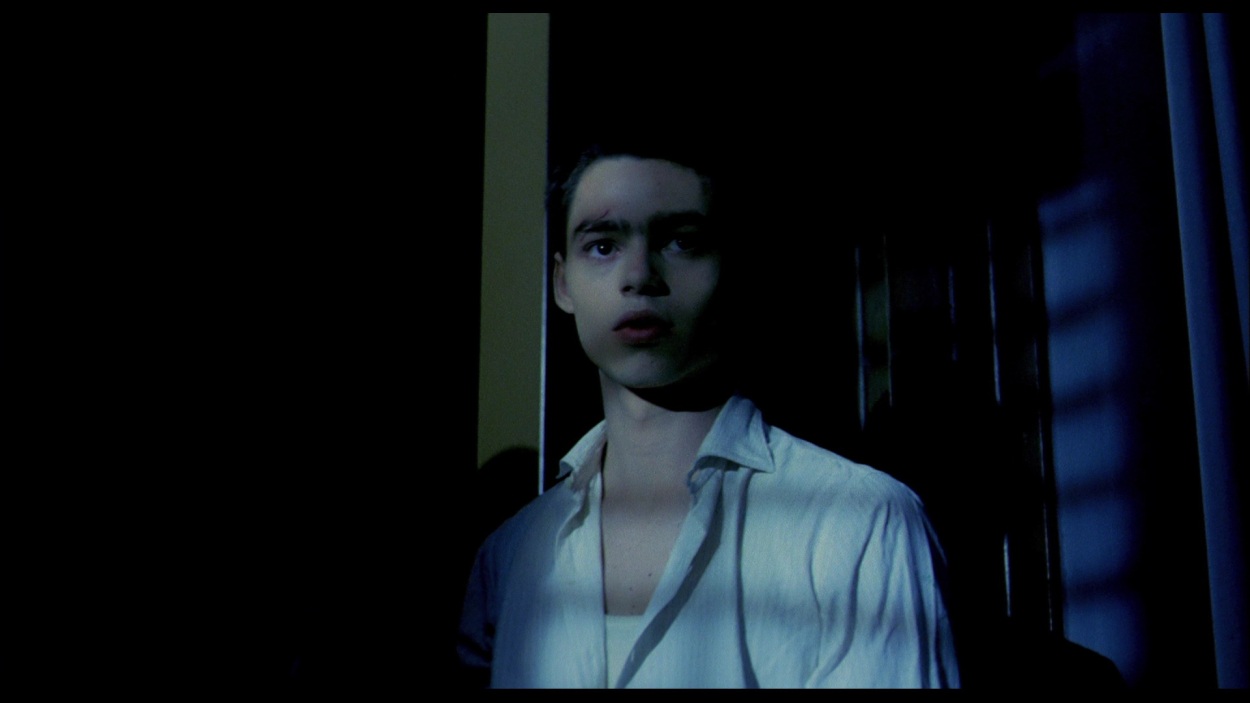 Agusti Villaronga’s 1987 debut feature, In a Glass Cage, is perhaps the coldest film that I have ever seen. From its icy blue color palette to the way in which it unflinchingly depicts the depravity of its tortured characters, this is a film that makes any selection from Michael Haneke’s filmography look like a leisurely stroll through the park by comparison.

The film opens as a man named Klaus, a former Nazi and doctor, brutally murders a young boy in an abandoned building, while an unseen witness sees the entire act. Klaus photographs the aftermath of the murder. A journal sits nearby, full of pictures of his former victims. You see, Klaus used to perform experiments on young boys in the concentration camps during WWII, torturing and molesting them before executing them. From what we can gather, Klaus intends for this recent murder to be his last, as he leaps from a building afterwards in an attempt to commit suicide.

Meanwhile, the aforementioned unseen individual who has been watching from outside enters the building, takes the journal, and leaves the scene. Klaus survives the suicide attempt.

A few years pass. Klaus lives with his family in a house on the countryside and has been confined to an iron lung. His wife is thoroughly unhappy, due to the many responsibilities that come with Klaus’ condition. Their daughter is equally affected by this dreary existence and has no friends. Finally, the wife sends for help.

Angelo claims that he is a nurse and that he really wants to care for Klaus. The wife distrusts him at first, but then figures that she would rather he do all of the work. After all, she’s just waiting for Klaus to die. She’s looking for a way out. Angelo begins to take care of Klaus – washing him, keeping the tank on his iron lung full of gas. Soon, however, we find that Angelo is not who he says he is. In actuality, Angelo was molested by Klaus as a boy, and has returned to reconnect with the man who stole his innocence.

Angelo is beyond damaged. Evil has seeped into and permeated his soul, and there is absolutely no turning back. Over the years, Angelo has studied Klaus’ scrapbooks and journals, reading of the horrors that he inflicted upon the innocent. Now, he wants to recreate all of it for Klaus’ amusement. He wants to gather all of the man’s demons and force Klaus to confront them. Angelo has become a monster as a result of Klaus’ abuse, and now, confined within that “glass cage” of an iron lung, the old man’s sins have come back to haunt him. Not only does Angelo have an erotic fixation on Klaus, he also begins to kidnap local children in order to reenact the most repellant segments of Klaus’ journals.

In the midst of all of this horror, Klaus’ young daughter will attempt to escape. By the end of the film, however, she will find herself caught in the vicious cycle of darkness that has terrorized both her father and Angelo for years.

This film is not an easy watch. I’m not exaggerating when I say that it is one of the most disturbing films that I have ever seen. With that being said, In a Glass Cage is a film that is impossible to ignore. It is one of the most accurate depictions of the ways in which evil begets evil. There are few films that are as potent as this one. Villaronga wisely keeps the audience at an emotional distance from the characters. There are several moments where we are asked to sympathize with these broken individuals. In a way, this is necessary, especially in the case of Angelo. Victims of abuse will either find a way to confront their pain or they will internalize it. It can fester and take over their lives. Villaronga knows this all too well. He’s not out to manipulate you into a certain mood or feeling. He clinically presents these images to us and then leaves us to deal with them in our own way. This is perhaps the most unsettling aspect of the film.

The performances are all incredible. You have to commend the actors for taking on such a difficult film. They cast includes Gunter Meisner as Klaus, David Sust (in an awards worthy performance as the young Angelo), and Marisa Paredes as Griselda, wife of Klaus.

Despite its unfortunate notoriety as an exploitative cult film, In a Glass Cage is actually a beautifully shot and well-acted multi-layered work of art, featuring a haunting score from Oscar-winner Javier Navarrete (Pan’s Labyrinth). It stands as one of the best foreign films of the eighties.

Make no mistake – In a Glass Cage is not for everyone. While I believe that this is an important piece, it should be approached with the utmost caution.

3 thoughts on “Review: In a Glass Cage”